Commercial Ceiling fans and their Types

Some of the most common and famous types of the commercial fans are discussed below. 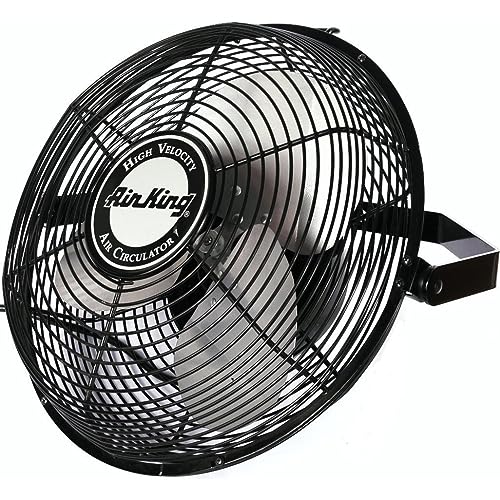 The velocity ceiling fans are considered to be the best fans as far as industrial ceiling fans are concerned, and they are produced by Craftmade. The look of these fans is considered to be a retro aesthetic. The fans are offered in a complete package which boasts a speed control available to be mounted on the wall to your liking. These fans have a warranty of 30 years. Some of the features of the velocity are three metal blades, a 12-inch downrod, 48-inch motor, a ball-shaped fan hanger, and two choices of blade spans (48 inches and 56 inches).

These fans have a clean and simple design which makes them ideal for industrial use. The company that manufactures the business ceiling fans is Modern FAN Co, a company which relies heavily on innovative technology. The interior of these fans uses an exposed ceiling coupled with a galvanized ducting. The lighting style of the business ceiling fan remains industrial. Its appeal is only boosted when other aspects of the fan are delved into, such as a choice between two blade sizes (42 inches and 52 inches), and the 14-degree pitch of the blade itself.  Add in the three different speed controls, and the three different heights (18 inches, 24 inches, and 36 inches) and the business ceiling fan becomes an easy-to-customize installation piece. The design of the studio ceiling fan is once again considered to conform to a more-retro aesthetic, but in a manner that makes it suitable for contemporary, hi-tech settings as well. The largest manufacturer of these studio fans is a company named Monte Carlo. The basic purpose of a ceiling fan is to provide a soothing breeze, and the studio ceiling fan has no problem doing that. Its appearance is perhaps its greatest feature, however, as it makes a stunning addition to any room. You can also attach a light bulb to this fan so that you can enjoy both, the pleasant breeze and lighting in your room—oh the joys of the modern world we live in! Some of the other qualities of the studio ceiling fan: a lifetime warranty for the motor, three different speed options (including reverse), a 4-inch downrod, and a balance and torque motor as well.

Monte Carlo is the company well-known behind the scenes for their production of the Manhattan ceiling fans. The Manhattan fan has quite stunning blades that boast a mahogany finish, and are then completed with a smooth curve in an attempt to add to the overall aesthetic of the fan. Any room furnished with a Manhattan ceiling fan will undoubtedly benefit from their addition. An efficient motor and sleek style don’t always go hand-in-hand, but in this case, Monte Carlo has made that possible. Monte Carlo is arguably the best in the business; the company continues to blend efficiency and design making it the go-to company to match any preference.

Some of the main functions of the Manhattan ceiling include: two motors (a conventional and a torque one), 52-inch blade sweep, and they are capable of being installed on sloped ceilings.

Additionally, this fan also gives you the option of three-speed controls, a lifetime warranty, and the great customer service offered by Monte Carlo as they stand behind their products.

Each day, the world continues to advance towards technological growth. These technological advances have had a noticeable impact on the ceiling fan, not surprisingly. When the ceiling fan was first created and implemented in the early 1800s, they had one purpose in mind: cooling down people. But, as the market (and the consumer) have shifted over the past two centuries, o has the ceiling fan itself, and what a magnificent growth it has been. The commercial ceiling fan is one of the examples of the impact of technology on the ceiling fans. These fans can be used not only in business settings, but are more-than-suitable for personal use as well. The market of commercial ceiling fans is a large one, and any consumer will have a wide-range of selections to mull over before purchase. Tower fans are also a common choice in commercial settings particularly desired for their air cleaning features.

The fans introduced—and subsequently detailed—above all boast great attributes that have their applications in both industrial and personal settings. Additionally, each of them maintains a pleasant aesthetic that will allow them to furnish a wide variety of rooms. Choosing a commercial ceiling fan is not much different from selecting a personal fan. Decide what you need, embrace what you like, be happy with what you get.