If You Like Stars – The Minka-Aire Ceiling Fan Offers 5 Of Them! 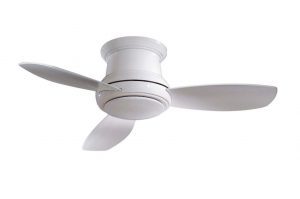 If you stop to think about it with a clear head, a ceiling fan is more than just a gadget you turn on when the summer heat becomes unbearable or to make Aunt Martha more comfortable in that spare room you provide her. It can move the air around in rooms where the fan has been installed when you can’t open windows or doors. That said, while the sale of the usual suspect, air-conditioners, continues to be popular, many home and business owners completely overlook ceiling fans (or tower fans)despite the fact that they actually can make a room feel four or five degrees cooler. Bet you didn’t know that!

And, The Winner Is?

Yes, folks, ceiling fans are like ants at a lakeside picnic – everywhere. Yet, like a lot of other things, some fans are better than others. And, the Minka-Aire Ceiling Fan has become not only recognizable everywhere, but the fan is a product of the best selling fan company in the world. Later on in this article, we will provide several buyer comments for your consideration. Ergo, if you plan to make a ceiling fan purchase for your home or business that is functional, very pretty, and offers the highest-quality of all the ceiling fans on the marketplace today, better think Mink Aire Ceiling Fans. And, yes, all products are warranted to be free of any defects in material and workmanship for one year from the date of purchase.

The Minka Group of home lighting products is well aware that the customer will always have a choice of what they buy. And even though they know you have choices, always keep in mind that the Mink-Aire Fan was voted the best ceiling fan available. And when you get a peek at the Minka Aire F518-WH 44 Inch Concept II Flush Mounted Ceiling Fan, it will take your breath away. There is no question that this product is the best (strongest) modern ceiling fan you can buy. And don’t worry about installation, either. It can be installed any place in your home or business.

The three White Blades and its integrated 100W halogen light look like they should be on the cover of a ceiling fan magazine. Oh, another reason why this product sits in the driver’s seat on being the best (thanks to many fan reviews) is the forward and reverse functions that make it useful year around. You can even control the ceiling fan speed using the AireControl Remote system that gives you the option of three different speeds.

If you are still “on-the-fence” about buying a ceiling fan thinking that its only use would be in a room somewhere or keeping folks comfortable in a bar or restaurant you own, maybe it’s time for some “what-you-may-not-know” about ceiling fans. 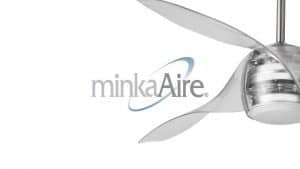 We have talked a lot about the Mink-Aire Ceiling Fan as well as mentioning that it’s the best ceiling fan on the market today. So, we thought it wise to let the readers of this article digest what others have to say about this particular ceiling fan. Most of these ceiling fan reviews were the courtesy of Amazon.com, and the rating is 5.0 out of 5.0 being best. Mentioning full names may not be advised, but you can always do your own research, in terms of validity.

* Ceiling fan reviews number one: Robert had read other reviews that said the fan was noisy. Not sure what side of the rowboat he was on, yet my family purchased two Mike-Aire fans and found them not only quiet and beautiful (loved the white color on the blades), but the units were easy to install. We did have some help from my brother in connecting the wires to the remote, but that was about it. The blades snapped right in and we thought it was a good move by the building company to install a little hook on the mounting plate that you can use to hold the fan in place while making all the connections. Too bad every lighting fixture didn’t think of that. Rating: 5.0

* Ceiling fan reviews number two: David also loved the coloring of the fan. It had very clean lines, and he didn’t think it looked sort of old fashioned like most of the ceiling fans. We also thought the person who considered the fan being too noisy was nuts. At low speed, you can barely hear it, and even at low speed, it seems to move a lot of air. We also thought it was a great idea to provide a remote with three speeds for the fan, plus an off/on dimmer switch for the light. Rating: 5.0

* Ceiling fan review number three: Harry purchased a size 44-inch white Minka-Aire fan. Since I live alone and have a limited knowledge of not only tools but wiring as well, I found that installing the fan to be easier than I thought. Although I did have to ask my neighbor for a little help with the wiring. Anyway, I was so satisfied with the ceiling fan I bought one more of the 44 inch and two of the 52 inch that I plan to install in my new home right after the coming holiday season. To be honest, I never thought I could find a ceiling fan that would meet all my expectations and be as functional, nice looking and quiet. Thanks to the people who own this company, wherever they are.

Finally, this review from Mr. Davis: I have had ceiling fans that look good but failed measurably. They were noisy or just did not blow the air. I don’t curse much, but these fans caused sweat on my forehead trying to lift everything to the ceiling. Today, I am happy to report, I gave my old fans to my ex-wife, and my new Minka-Aire is quiet and works like a charm via my remote.