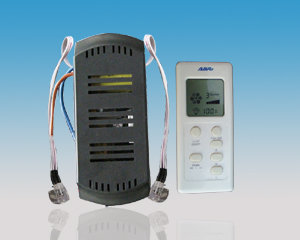 Ceiling fans have been with us for more than a century, and they’ve been changed to meet our needs according to the modern trends and fashion. They were there when there was no concept of digitalization. Now, ceiling fans have become quite sophisticated, running on our finger tips without giving us any trouble to move.

Ceiling fans with remote control operate just like the way remote-controlled televisions work. With the help of a handheld device, you can do a lot of things that used to be done manually:

Ceiling fans with hand-held remote control device have gained a lot of popularity. Manufacturers such as Hunter remote ceiling fans offer hand-held device as the basic component of the ceiling fan.

Apart from the basic functions mentioned above, there are several different advanced settings that vary with the model and the make. Some of them include:

Remote controlled ceiling fans are available in a wide range with respect to finished and styles. You can buy hand-held remote ceiling fans for indoors and outdoors, based on your requirements.

How to Install a Remote Control Ceiling Fan

Remote-controlled ceiling fan installation is quite easy. With all the steps included for installing a traditional fan, there are few additional steps when you are installing a ceiling fan with hand-held device.

This is because of the factory setting which is generally the same for all ceiling fans of the same model. Instead of ending up with a rogue fan that will put you in trouble with functional issues, set unique fan frequency code that will save other appliances.

You can do the following to avoid this particular issue:

That’s a common thing these days. With so many appliances having different hand-held devices, people tend to forget where the put one that controls one particular appliance. Although, you’ll get frustrated thinking about the replacements, it’s not all that difficult if you think carefully.

Cleaning your ceiling fan’s remote control is not a complicated task. In order to prevent germs, do the following cleaning steps: