My Ceilings Are Low and I Need a Ceiling Fan The ceiling fans as we all know are the most common article found in our homes. Let us have a look back when it all started. These fans were first introduced in the early 1960s. The place where this happened was The United States Of America. At that time these fans were not powered by electricity since they had no electric motor, it was all mechanical stuff back then. There was a turbine a stream of water along with it which was used to drive some belts that were connected to the blades of the fans. At that time the numbers of the blades that the fans had were only two.

It was then the turn of the electrical ceiling fans to come into existence. In 1882 a person named Philip Diehl invented a fan that was electricity driven. He was the one who connected the electric motor to the ceiling fan in the first place. The motor that was used initially was the one used in sewing machines; for sure Philip had to do some engineering with this particular motor to make it work with the fan. This soon became very common since the use of the ceiling fans was immense at that particular time. At the time of World War I these fans were coming with four blades rather than two which were introduced initially. The four blades gave this fan more power and more air to circulate around.

The ceiling fans slowly became important in every house hold. These fans in today’s world come with a downward facing rod one end is attached to the fan motor while the other is attached to the mounting plate. It is the rod that makes the fan a bit far from the ceiling and if you have a place with the ceiling not that tall this might be an issue for you.

These fans best fit the houses with taller ceilings. Now we have a question at hand what should be done if you have a low ceiling and want to have a ceiling fan. Well the answer to this question is the hugger ceiling fan. 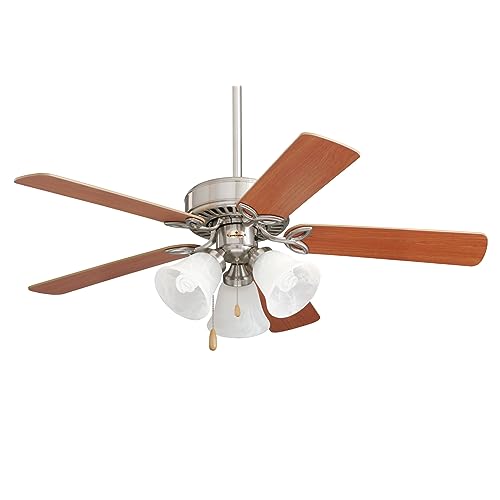 The huggers came in handy with low ceilings because of their compact design and without the downward rod these fans can actually fit in almost anywhere. With low ceilings one can face the issue of clearance but when you have the huggers installed in the house you can be free from this worry. Since these fans have no rods they are directly attached to the ceiling that is the reason why these fans are called huggers. These fans are so close to the ceiling that they almost hug the ceiling unlike the standard ones which are quite far from it.

There is a variety to choose from when it comes to these fans. You can almost have it custom made according to your likings and needs. As everything in this world has some merits and demerits and these fans also have some. When a person is looking to get a new ceiling fan the most important factor for him to look upon is the circulation of the air the fan provides. The huggers are not as good as the standard ones when talking about the air circulation.

These fans have made their mark not only at the places with low ceilings, also elsewhere. Since the design of these fans is so sleek and compact therefore people are more inclined towards buying these fans. Some of these fans also come with a D.C current motor hence making these fans more cost effective and at the same time more efficient.

Another issue that people find with these fans is that they are somewhat hard to install as compared to the standard ones. As we all know that the standard ceiling fans can be installed really easily, there is not much to do when installing a standard ceiling fan. On the contrary, you may find it a bit difficult to install the hugger ceiling fans. This is not that big of an issue because all these fans come along with an instruction manual and by following these instructions carefully one can easily get rid of this problem.

The technology in every field is changing very rapidly so is the technology in this field. The manufacturers are busy to come up with some new ideas to make these fans more user friendly, cost effective and with enhanced features. You can find a variety of these fans available in the market that can easily suit all your needs. No matter what the interior is you surely will come across a fan that best fits the interior. As all these fans come in different colors, some fans also have dust repellent blades.

Since the huggers are more advance in technology as compared to the standard ones, therefore people prefer them over the standard fans. It is common human nature that people want change in their daily lives, they want most of the things to be different than what they have used over a passage of time. So it can be concluded that the hugger ceiling fans have a slight edge than the traditional or the standard ones.